Hollydene is an historic Hobart property with a long story as one of the city’s oldest and largest boarding houses. The oldest part of the property dates from the mid 1820s when earlier huts gave way a grand two storey house occupied by the Mayor of Hobart Town. Between 1910 and 1925 the original house was lost behind several additions and a new facade.

Neglected and run down, Hollydene was purchased by the University of Tasmania to become an integral component of the new Medical Science research and teaching facility. The conservation and adaptation of Hollydene to create a variety of student spaces was undertaken cautiously—doing as much as necessary, but as little as possible within a limited budget.

Our approach to this sensitive project involved judicious removal of some of the later additions, reconstruction of exterior rubble walls and application of a new lime-based render, with minor restoration inside involving rewiring, patching, painting and new carpet. To honour the history and story of the building, the 1825 and 1910 sections were repainted in the colours of each era, The front veranda is a reconstruction based on a detailed 1910 photograph, which also informed the selection of plants for the front garden. The rejuvenated Hollydene is a sensitive development that highlights contrasting eras of craftsmanship between old and new.

IN ASSOCIATION WITH LYONS 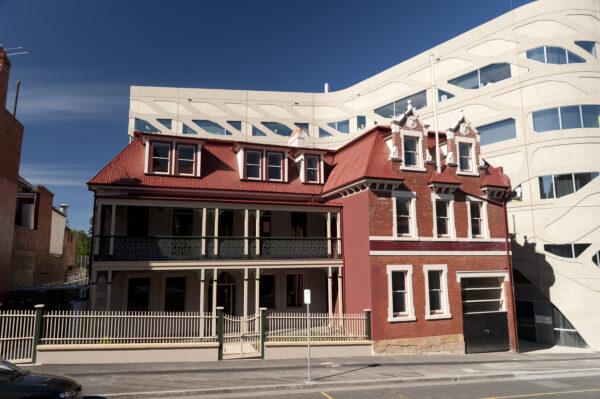